A Good Life and a Good Death 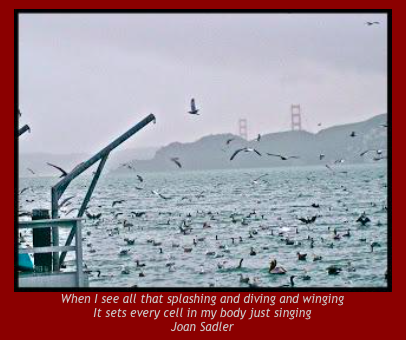 Rebecca’s Aunt Joan–whose blog Joan’s Stones was the topic of our newsletter in March as well as many other newsletters on creativity and aging gracefully–passed away last month.  Although it may sound odd, she died what we would describe as a “good death”.
The last days of Joan’s 95 years were spent overlooking the San Francisco Bay.  She had lived there for 40 years-listening to the water lap up to her deck, watching seagulls and pelicans swoop in for a morning meal, and seals lazily dipping in and out of the waves.
Rebecca and her husband KC were blessed to be with Joan the day before she slipped into unconsciousness.  As Joan was pleasantly looking out over the water, she mused that “When I was trying to learn how to meditate, people would say: ‘Imagine that consciousness is like the surface of the water.  Meditating is like going below the surface’.   But all I see now is the sparkles of light reflecting off the waves.”  Later we wondered exactly what she had meant.  We decided that she was saying that, in her last moments, she was simply appreciating beauty.
Last week we came together to celebrate Joan’s life.  Her daughter gathered flowers from the rose garden Joan and her late husband, Harrison, had cultivated over the years.  Each of her children and her many nephews, nieces, and their children, shared about how she had impacted their lives.  What was mentioned most often was her desire to learn about who we were, her endless curiosity, her willingness to experiment with life, and her belief that we could reinvent ourselves at any age.
Joan was one of those people who seemed to be undaunted by time.  She was actually tap dancing last Thanksgiving at 95!  Even after she had a stroke a couple of years ago and had to give up some of her favorite activities, she would always marvel that she woke up each day without pain and with her faculties intact.
Joan did struggle with an enduring question–as her friends and loved ones passed on and her ability to do the things she loved to do (sailing, tennis, and dancing), she wondered what she was “supposed” to be doing in the world.   She didn’t feel like she had been born for a particular purpose and would often marvel at people who had strong passion and drive.
In some ways Joan found her answer when she had her last stroke in March.  She realized that, even though she had never figured out exactly what she was here for, nevertheless she was loved, profoundly loved.  She really felt this love and it was enough.  She could leave this world fulfilled.
The message we took from this was that it’s not always just the purpose you find in life that matters but also what you appreciate in the life you’ve had.
Our handout this month, which we thought would be fitting, is on gratitude journaling.  Click here to get that download.
Positively yours, Rebecca and Gioia
Art Activity
Write about what you appreciated most in your life.  Respond to the writing with some kind of artwork.  We might suggest using more expressive media like chalk pastels or paints with bigger brushes on larger paper.  We’d love to see your artwork if you want to share it here on our
facebook page. 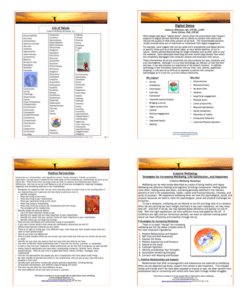 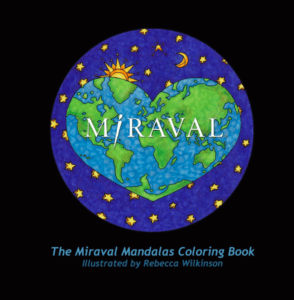