The Cat Out of the Bag and Other Stressors 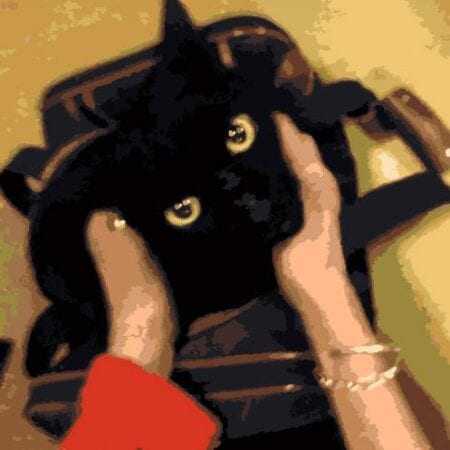 Rebecca recently had her hands full transporting her cat, Don Juan, from DC to Tucson.  The trip was an absurd comedy of errors.  She recounted the day as follows:

Things started out fairly uneventfully for us at the airport.  I had TSA pre-check so that I didn’t have to take off my shoes or take out my computer and I could just focus on walking Don Juan through X-ray.  He was cooperative at first, but then struggled when I tried to get him back into his bag.  Somehow, I ended up holding him and the bag with my hands and then nudging him in with my head.  When I looked up, the TSA officer behind the X-ray machine had dropped her jaw and her eyes popped out in shock and disbelief.

Shrugging sheepishly, I zipped the bag up and headed into the terminal.  Not 10-feet past security, I heard a sudden commotion, saw people gesticulating.  I realized they were yelling at me that my cat was “out of the bag”.  I looked around to see Don Juan running away toward a staircase that led to who knows where.

I dropped my other bags and sprinted after him, petrified that he was going to bound up the stairs never to be seen again.  Fortunately, he froze as I approached and let me scoop him up. As I turned around, I saw a troupe of five airport police officers standing next to my bags watching the whole scene with benign amusement.  In their midst sat a German Sheppard the size of a pony.  In a flash, I wondered if he would charge at us, sure that if he did, Don Juan wouldn’t stand a chance.  But he seemed curious, as placidly amused as his human counterparts. I was glad that Don Juan had not gotten on his “seize” radar.

Yet again, I wrestled to get Don Juan back in the case, now with an audience of cops, dog, and travelers.  I made sure this time that the bag was securely closed.  At this point, Don Juan was yowling and restlessly turning around in his bag, making it look like a caricature of a storm cloud with thrusting fists bursting out of its sides.

At the gate, I was told that even though I’d paid for the extra “bag” (cat), I would have to check my rolling suitcase.  This meant I had to carry all 22-lbs of cat myself instead of propping him on suitcase.  For some reason they’d changed planes and they had also changed my seat from one with extra leg room to a cramped one way in the back.

I was able to get on the plane early, so at least I could ask for some water for Don Juan.  As I followed a flight attendant to the back station to get the water, I heard a commotion again.  Another flight attendant was calling out “Ma’am!  Ma’am!  Your cat is loose in the plane!”

At this point, more people were starting to board.  I wondered what on earth I would do if he left the plane.  As I rushed forward to catch him, the few people already on the plane looked sternly at me.  Even in the midst of panicking about Don Juan, I thought running through the aisles chasing a cat must look pretty comical, but my fellow passengers were clearly not amused.

Again, by some good fortune, Don Juan hadn’t gotten far.  He was under seat 20F.   I had to lie down the entire aisle including the walkway to get to him causing  someone to literally trip over me as people were heading to the back of the plane (couldn’t they see I was there on the floor, it was hard to miss?!).

Once again, I got Don Juan back in his bag with some unpleasant wrestling.  By now I had some fairly deep scratches.  The attendant who’d gotten me the water brought me some Bandaids.

The back of the plane filled up and, in addition to Don Juan, 5 babies followed (how many flights have 5 babies?!).  Each time the plane’s cabin pressure changed or the engines got louder, cat and babies all cried helplessly.  Don Juan was so agitated that I had to keep his bag in my lap and put my hands around his head for the whole 4 hour trip.

At one point, when my helpful flight attendant came around with drinks, she saw that I had Don Juan in my lap and said, “I have to tell you that you are supposed to have your cat bag under the seat.”   I plaintively told her that if I didn’t hold him he would howl the whole time.  When she said the exact same thing, verbatim, I realized that she was indicating that she “had to tell me” but wasn’t insisting that I actually do it.  She studiously ignored me for the rest of the trip, for which I was very grateful.

When we got to Phoenix, Don Juan began furiously scratching at the bag to get out.   By the time we got on the small jet prop to Tucson, he’d completely exhausted himself and was so still that I was worried he’d had a heart attack.

When we finally made it to Tucson, he warily crawled out of the bag, subdued but already slightly curious about his new digs.  He seemed to get it that we were home and the journey was over.  We both slept long and hard that night.

In the past, being anxious person, I would have been agitated by the fiasco in the terminal, or seethed when the airline told me I couldn’t take my roll-on with me, and fretted the whole flight about whether the attendant would force me to put Don Juan under the seat, and maybe even have been embarrassed about the scene(s) I had caused.  However, throughout the strain of this seemingly never-ending saga, I was actually able to meditate and even sleep a little bit.

Although I am constitutionally disposed to be anxious, which is worse in high stress situations like airport travel, I could practice tools like breathing, meditating, not wasting time on things that are out of my control, focusing on making the situation as tolerable as possible, and taking it one minute at a time.

Other things that work to help manage stressful situations:

Positively yours, Rebecca and Gioia

Do art work with symbols for strategies that help you when you are in a high stress situations.  Use drawing materials or make a collage.  Share your image or even one of your similarly absurd stories here or on our facebook page.